I try to post something once a week if possible but this past week I have been feeling sick. I think it is the long hours at work and a bad reaction to some medication that I was prescribed at the Doctors office.

I did finish painting up 6 bisowers for my Swedish Medieval club game of Håtunaleken.

I will start working on the 12 foot troops to make up my unit of Foot Serjants. Once I am done painting and basing all of them I will post a picture of the total force. I did not take any pictures of the figures yet.

On a positive note my daughter Annabell will be graduating college in May. Here is a picture I took of here when she was a Freshman just starting college at Emory University in Atlanta GA.  It has a fitting quote on it too. 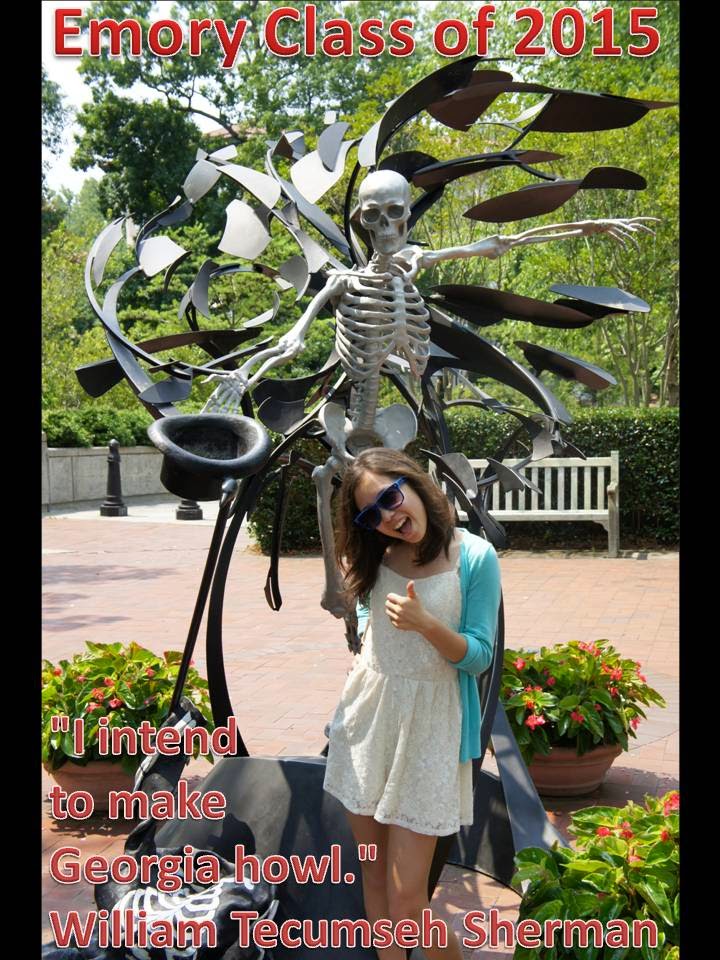 I will be traveling back to the good old US of A in May for her Graduation. I will be a proud Dad.

Well I hope everyone will have a good week.

Hi again!
Well yesterday we had a game at the club.  I wont' go into many details as Jesper over at The Miniature Mayhem did an AAR for the game!

BLUF: great fun and a tough fight for the Union. It was close run but the Confederates were able to fix and flank the Union position. 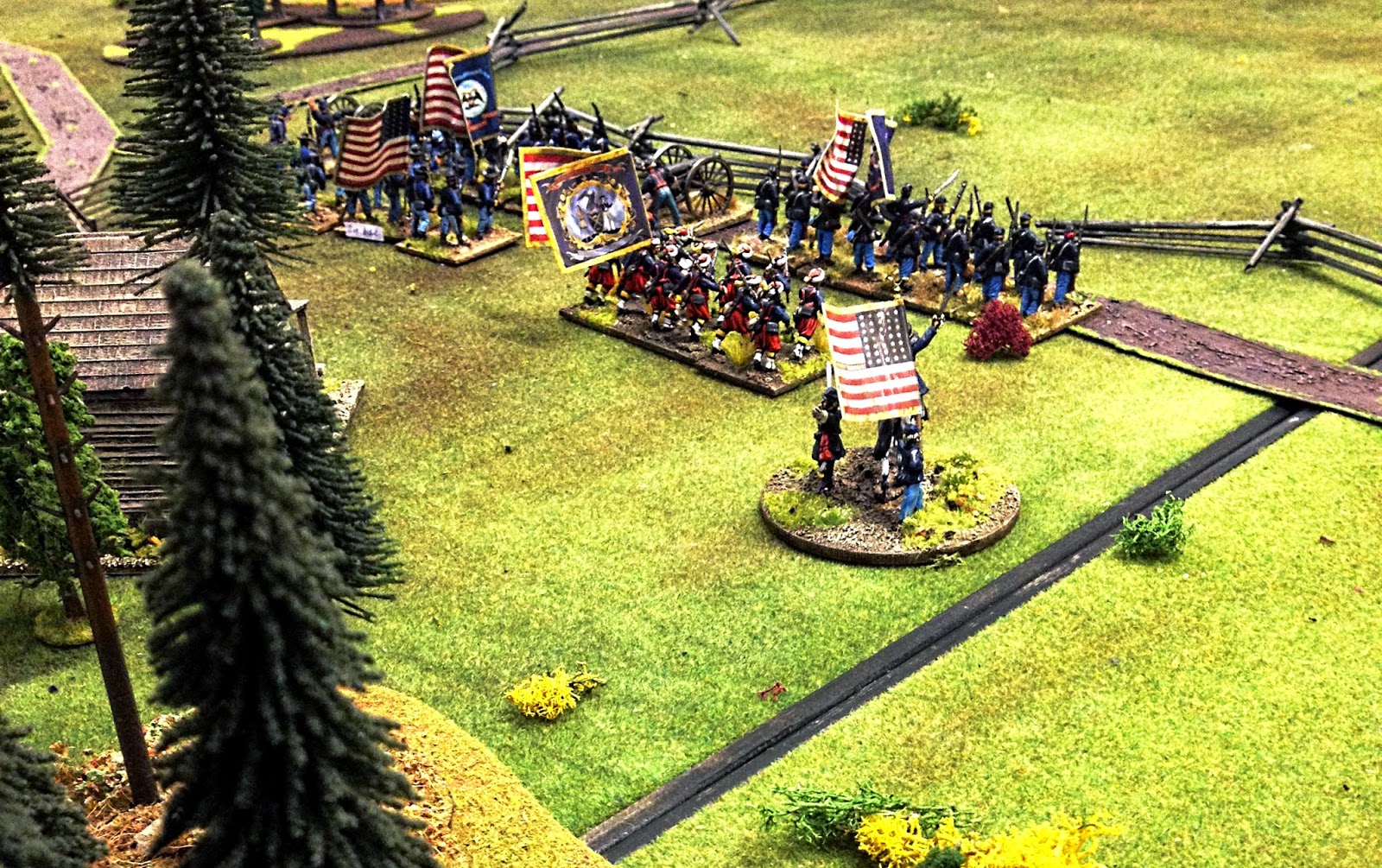 Thank you for reading my blog and I should have some more pictures of my painting up this week!

Posted by Rattlesnake at 4:52 PM 8 comments:

First game of the year!

Hi everyone!
Well this past Wednesday I played my first game of 2015.  It was a good game of Naval thunder with Soren, Jesper and myself.  We played a what if scenario with the US and the British fighting a German force that included two Zeppelins.  Soren came up with the scenario and also the rules for shooting down the zeppelins.


We meet up at our favorite burger place near the club and then we headed to the club and dove straight into the game.The initial set up had was per the map and the US player, me came in on turn 3.


We started to maneuver our ships and the British was set to take on the zeppelins that were being protected by the two Battleships as the Battlecruisers broke formation and headed out to slow the American squadron coming on from the NE corner of the board.


I was not long until we all started to fire and find our targets. At long range there were not many hits, but that was going to change soon.

First blood was scored by the British on the Battleship Fredrich Der Grosse and a normal flooding situation turned bad for the German Battleship. Because of heavy flooding she began to list to port and this reduced her speed and ability to accurately hit targets.


Because of the flooding and reduced speed the Battleship Fredrich Der Grosse had to break out of formation to allow the zeppelins the speed they needed to reach the coast before the American Battleships could get close.

This is the first game we experienced Rutter damage and it added some unique situations for both the British and German fleet! in the end the US Squadron was the only ones able to maintain formation throughout the whole battle.  The USS NY started to take damage and an engine room hit meant the US squadron could only move at a rate of 3 instead of 4. This prevented the US from getting to the coast to help the British deal with the German force.

As you can see from the image below the British were trying to slow down the German force heading for the coast and the US Squadron was engaged in a gunfight with the German fast Battlecruisers.

With damage adding up on all sides the ships started to sink, the first was HMS Indefatigable. Here you see one of my newly made sunk ship markers being used.


After some time the HMS Lion was able to score some hits on the Zeppelins and eventually one of the blew up and created a second sun for a short period of time.


The US Squadron was having a hard time hitting the fast German Battlecruisers and they were slowed down again from additional damage to the USS NY.  Things were looking like the British would not get any help from the US Squadron.
Shortly after scoring a killing shot on one of the zeppelins the HMS Lion is also sent to the bottom by the German battleships. At this point two British Battlecruisers had been sunk and only on Zeppelin had been destroyed by the allies.
Soon things were going to change the German Batlleship Fredrich Der Grosse had another problem with flooding and the ship capsized ending the German winning spree.  Here is a shot of the sunk ships near the coast.

At this point we were all tired since it was the first day back to work here after the holidays and it was getting late. We tallied up the damage and it was agreed that the Germans would have lost the two Battlecruisers as they had taken a lot of damage from the American Battleships.  It was also agreed that the last German battleship would survive and the Zeppelin would reach her target and make it off the board.  The US Squadron was too slow and too far out to stop the battleship and zeppelin from going off board.

We tallied up the points and it ended as an allied victory. I did not look so good for the allies but the point value of the lost Zeppelin and the Battleship and Battlecruisers made it an Allied Victory.

Here is a chart with the starting and ending hull points for each ship in the game.


Here is the overall starting and end hull points for all the forces involved in the battle.


Well thank you for reading my blog and have a great weekend.