Working on a Campaign!

Well my mind has been working and I am going to set up a little campaign.
I made the map today and added some test units to Berthier, the campaign manager that I am using to set up a campaign that can be used for a number of different time periods. 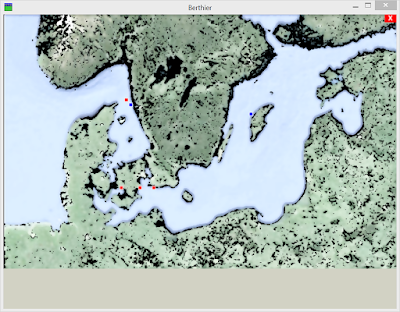 I have tested out both naval and land units and so far things are working OK.

I just need to finalize the game and do some tests to make sure things work well and then we can start using the campaign manager to hep me manage the first campaign in the Baltic. 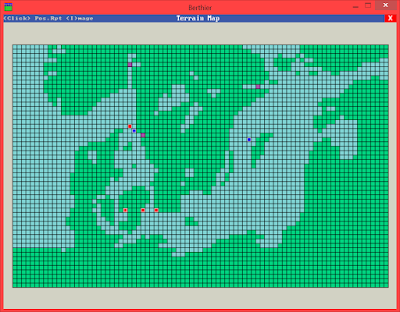 I had some time today after going to the beach to paint up the firs of many 28mm figures for the 30 Years War. I am going to be working on building a force of Bavarians for an upcoming campaign that will be run at our local club here in Stockholm. 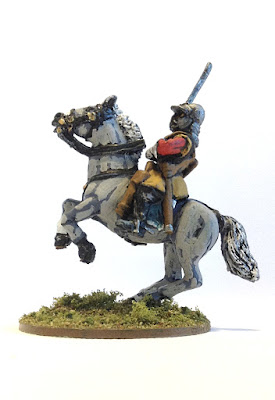 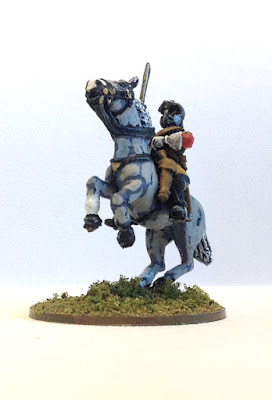 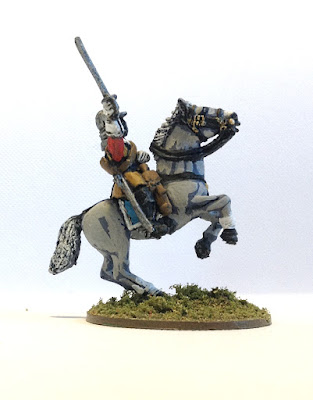 The mounted figure is from Bohemian troops LINK and is a great figure. I ordered 6 figures to create the cavalry unit that I want to make.  I will have a total of 6 mounted troops, including one officer, one ensign and four troops. 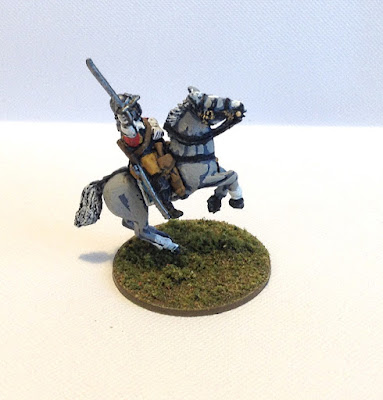 The horse is from Front Rank LINK the mounted miniatures from Bohemian troops are designed to work with the Front Rank Horses that can be found on there website. 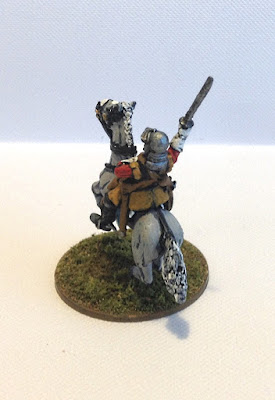 This is the first time I have painted a figure from the 30 Years War. 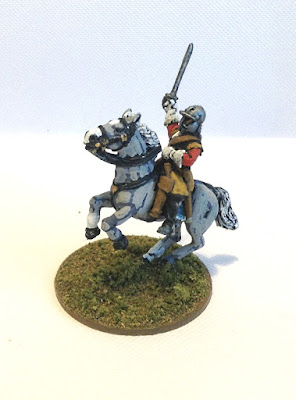 I will have more pictures as I paint up the other miniatures.

Have a great weekend!!!!

Posted by Rattlesnake at 7:00 PM 6 comments:

Hi all!
Yesterday Soren (over at Black Powder Games) and I played a game of Form Line of Battle with our ships for the Scanian War.


We both had 3 ships each, Soren commanded the Danish squadron consisting of: The Flag ship Christianus V (85 guns), Churprindsen (74 guns) and Christianus IV (58 guns).

I commanded the Swedish squadron consisting of : The flag ship Kronan (110 guns), The Nyckeln (84 guns), and the Armarant (52 guns).

This game we assigned a flag ship and assigned an Admiral to the flagship.  Each Admiral has his own ratting and the Danish had a Superior Admiral and the Swedish had an Average Admiral rating, Which I think worked out well.


The game started off with the two of us setting up the scenario and who had the strategic advantage, which fell to the Danish. This allowed Soren to set up his fleet after I had set up mine and he had the weather gauge in his favor.  This means he was able to direct the direction and flow of the battle.


Soren was able to maneuver into position to get off the first shots that were at long range at the Kronan.

The long rang shots from the Danish squadron fell short and Soren started to maneuver his ships to get close to me, where I was trying to keep my distance and use the advantage of having the Swedish "Death Star" the new name for the Kronan!

Well I took the opportunity to turn and fire at the Christianus V with Kronan and my first shot hit home and started to wear down the broadside factor of the Christianus V.  I will do a break down of the starting hull, crew and broadside factors and the damage each ship took at the end of the AAR. You will see that the Kronan did very well for herself, probably better than the real ship. At least she survived the game and did not self destruct like the real ship.


The game contained with all ships getting into the fight and firing at long, then medium and then finally short range.  Soren soon found out that it was going to be hard to take down the Kronan. He started to be more aggressive and started to get in close to try to board the Kronan.

Soren was able to do some heavy damage to the Swedish Nyckeln who lost a mast early in the game due to a critical hit when she was hit by a full broadside fired from the Churprindsen. This was the first time a critical hit had been scored in our two games. So it was fun going though the process of figuring out the damage received by the critical hit.


Later on as we continued to pound away at each others ships the Nykeln again is hit by a salvo and gets a critical hit which starts a fire! Fire on a wood ship loaded with gun powder is bad!!! Luckily the crew was able to put the fire out fast!


After the boarding attempt Soren's and my line of battle fell apart and the fight became ship on ship. A lot of damage was dealt out to ships of both sides. We did have a boarding action between the Nyckeln and Christianus V.  During this boarding action we ran into our first issue with the rules and I will be writing the authors of the rules for a clarification on how to to settle the issue we had.  Basically the result of the boarding action is that I was able to defend the Nyckeln and repel the boarders with both of our ships losing crew parties to the point we had just the number of crew to run the ship and man the guns. Both ships cut free and started to sail away in a hail of gun fire!

Soren continued to try to disable the Kronan and was able to manuver to get in some very good shots but the difference in size of the ships and the reduced broadside factors on the Danish ships did little damage.


The Danish fleet was doing OK the Christianus V had taken a lot of damage and was almost to the point that she would not be able to fire anymore. The Churprindsen had taken some damage but she was not at full strength and would not be able to take on the Death Star alone.  Christianus IV was in good shape but again she was a smaller ship and the her ability to defeat the Kronan was limited.

At this point we called the game due to time, we had planned to play two battles but we only had time for one since we had more ships and more unique events take place.  We called the battle a tie but that is to be debated. Ships on both side were severely damaged and will need a lot of repair while other ships were in good condition.

Please check out the charts below for a breakdown of the starting condition of each ship and the damage taken.

Here is a few pictures from today's epic battle! 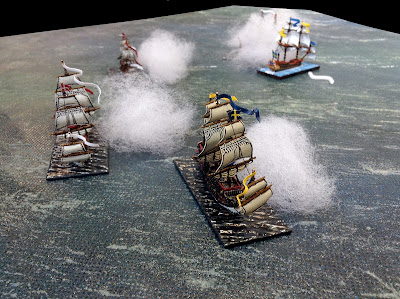 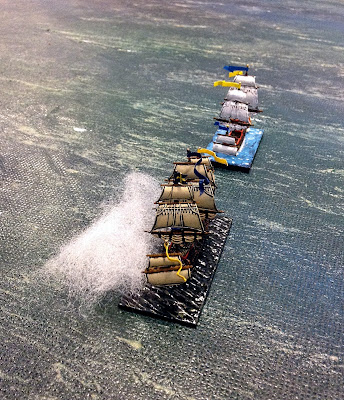 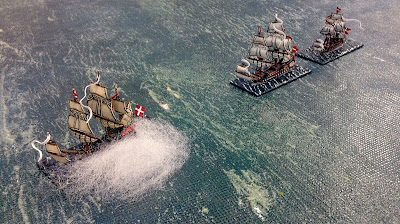 Posted by Rattlesnake at 8:03 PM 5 comments:

The Red Army / The Workers' and Peasants' Red Army

Well I have been busy painting some miniatures. 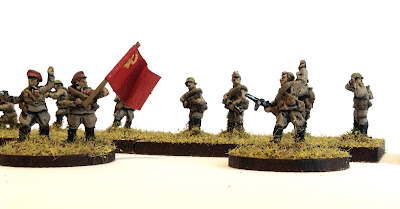 These are all Skytrex 15mm Soviet Infantry and command figures. Again I have to say that the miniatures are very well made and are easy to paint. 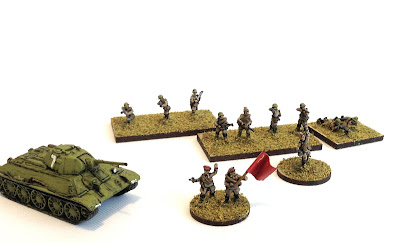 I have painted up the command group as well as the first squad of infantry. Eventually I will have a full platoon of Infantry for the Chain of Command campaign, Konigsberg 1945 Westwind.

Please take a look at the pictures of these great troops. 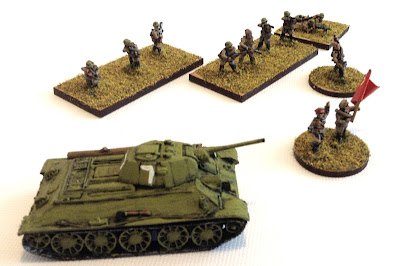 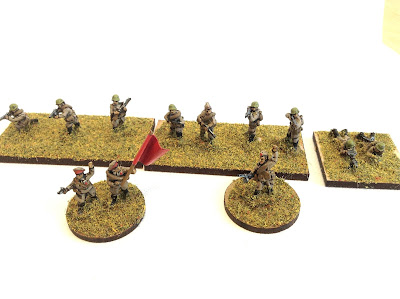 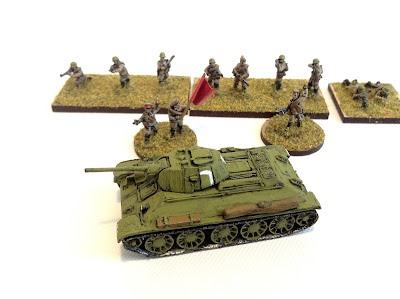 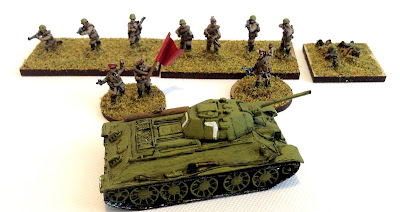 The Red Army took a beating from the Germans early in WWII but they gave back as much as they took and they were the ones who took Berlin.  They suffered high casualties but they continued to fight until Germany was defeated. 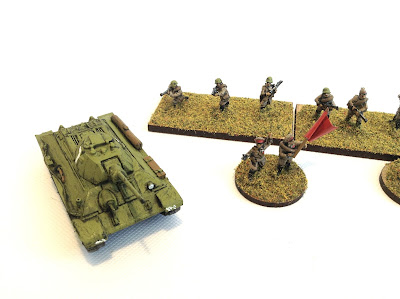 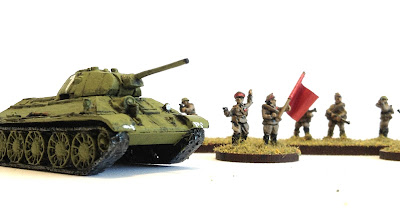 I recently got my Military History magazine in the mail and I picked up the Flames of War Colours of War book at the local game store. 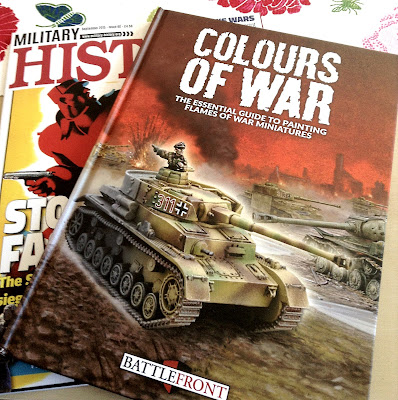 Posted by Rattlesnake at 5:46 PM 5 comments: