First club game of What A Tanker AAR!

I am behind on writing up my gaming activities. I have now played a total of three club sessions of What A Tanker.  I will do my best to do a write up on the first club game of What A Tanker so you have an idea of what I think and how things played out. 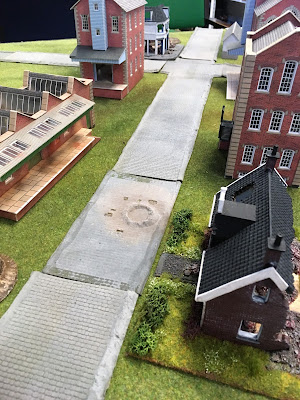 So myself, Koen and Joakim got together at the club to play What A Tanker (WaT) and we set up the table for an urban setting with some great 20mm building and tanks. The board had lots of streets and buildings to make it a challenge to acquire and aim at your opponents tanks. The Setting was France 1940. 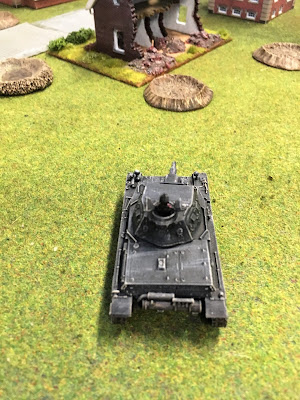 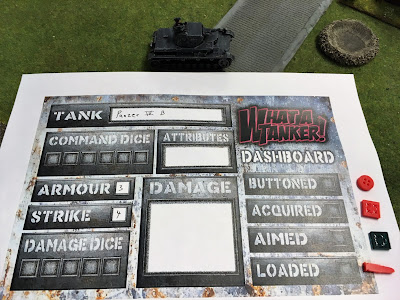 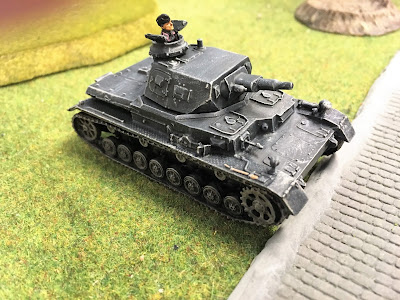 I took command of a Panzer IV, Koen took a Stug III and Joakim took the two French tanks, a S-35 and an R-35, both pretty good tanks. We set up using the short sides of the table as our deployment area and then the fun began. I ended up chasing the R-35 around a church on my side of the table as Koen did some hide and seek snipping at the S-35. 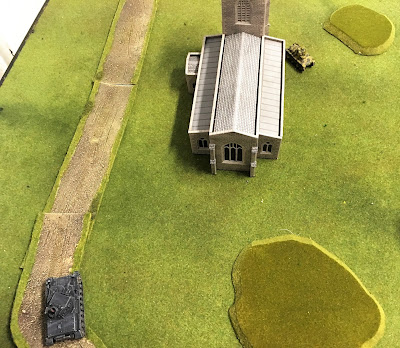 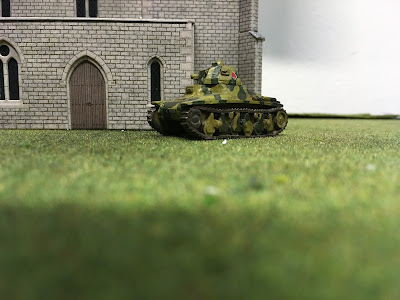 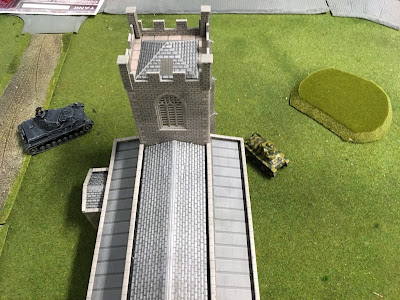 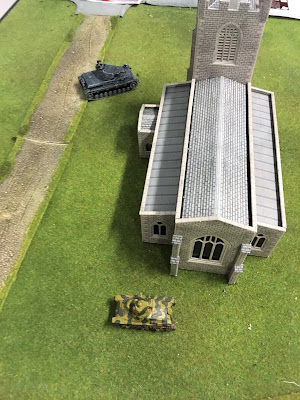 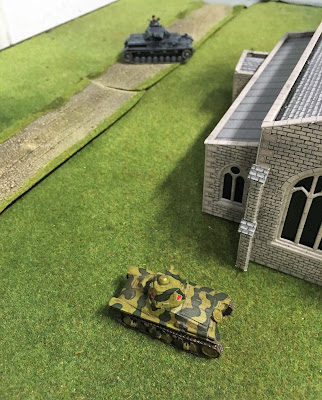 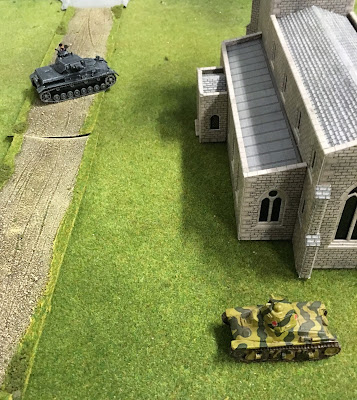 I tried to use my mobility and had some good dice rolls that allowed me to move a lot.  Eventually I moved to the other side of the table to help take on the S-35. 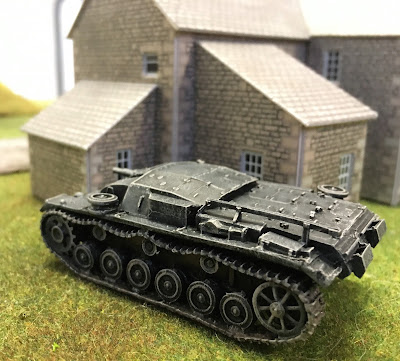 As I raced over to the other side of town I started to take hits from the R-35 as it tried to chase me down. The buildings help me to break a lot of his acquired locks on my tank but I still started to take temporary damage. 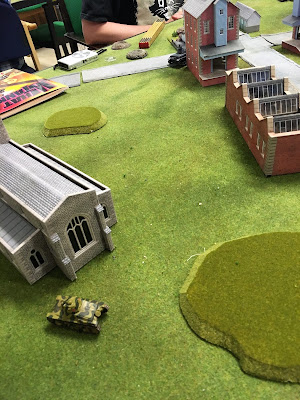 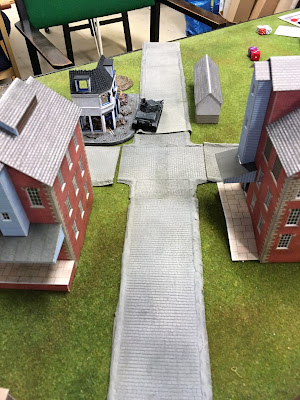 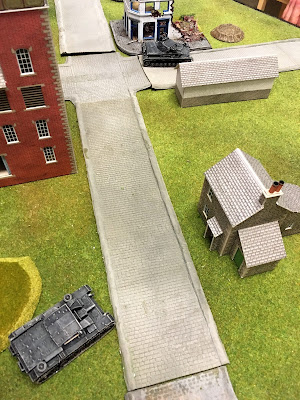 After out running the R-35 Koen and I started to work on the S-35, which is a tough little tank.  Eventually I was able to get into a good position to get in some shots and the dice worked well in my favor. 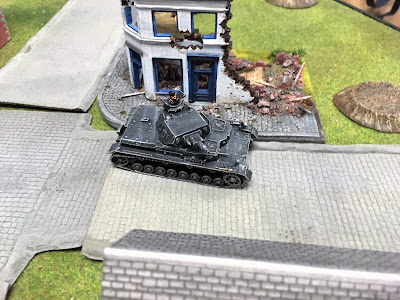 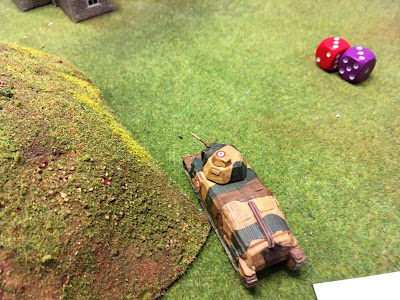 The advantage to me moving over to the other side of the table was to flush out the S-35 from hiding behind the hills and allowed Koen and I to concentrate on the S-35 while the R-35 tried to make it back into the fight. I finally got in a lucky shot and I was rewarded with my first kill. I was able to take out the S-35! 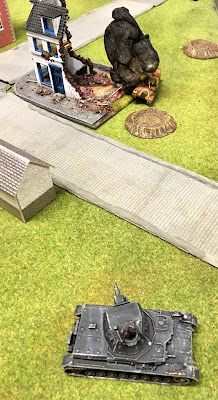 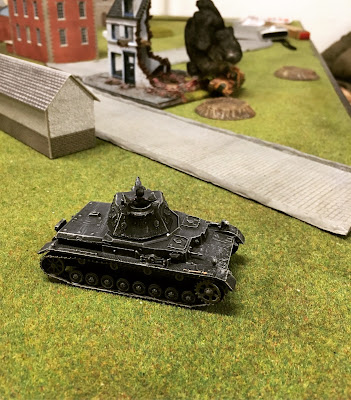 At this point Koen and Joakin were in a gun duel at close range and both rolled double ones on there to hit dice, which is not a good thing in these rules and they lost both aim, and acquired status.  This all happened in the same round of firing so it was pretty funny to see.

I enjoyed the game and I think it is nice to have a game that allows a player to focus just on the tank aspect of combat during WWII.  I must commend TooFatLardies for producing a fun game.  We all enjoyed the game and we have had other games since playing this first game.

The only down side was the urban setting, for the first game, we were still figuring out the rules. I would not recommend using an urban setting unless you are already familiar with the rules as it make the game take on a different feel. To me it slows down the game and it becomes a cat an mouse game with individual tanks fighting it out.  I say this because in my other games, which I will write up soon, the feeling is very different and more tactics are required and the number of tanks involved makes a big difference when it comes to winning the battle.

More on what I would like to do with these rules in the next AAR.

I hope you liked the AAR and I Strongly recommend these rules to anyone who likes WWII history and or tanks!

Have a good day!

Posted by Rattlesnake at 8:19 AM 8 comments:

Finished up the T-34's this past weekend! 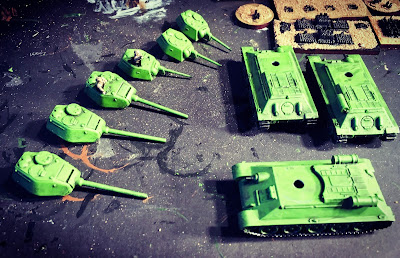 Sorry for more pictures of T-34's but the box set from PSC comes with 5 and I wanted to paint them all up. I plan to do some experimenting with Ammo paints and do some weathering on some of my vehicles, I may not give every tank the treatment but I think it will up my game when it comes to how the tanks look. 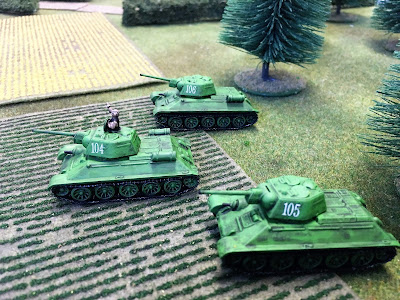 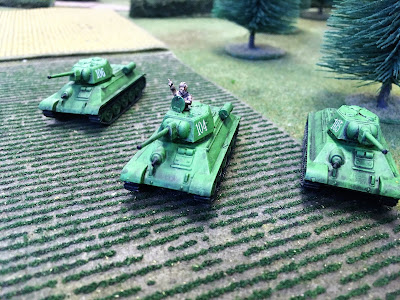 Enjoy the pictures. I have two What a Tanker sessions to write up. I have been busy with preparing for a trip to the USA but I have had time to get in a few games and I have to say I am really enjoying the rules. I have done a battle in an urban environment and a more open terrain.  They were two different games and you have different strategies depending on the terrain. 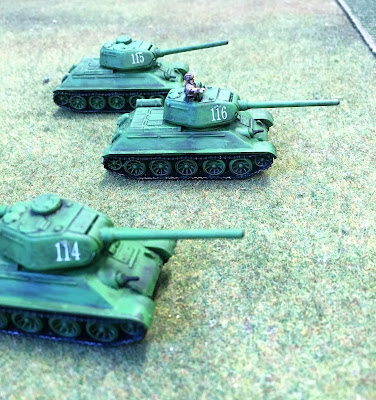 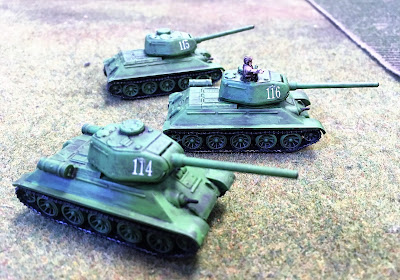 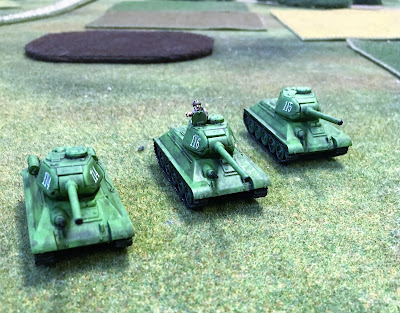 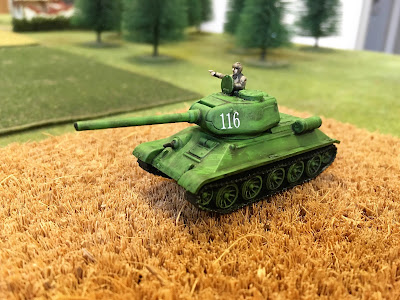