Hi everyone,
Sorry for the delay getting this posted but I have been trying to take advantage of the last few weeks of sun here in Stockholm before the darkens of winter sets in. 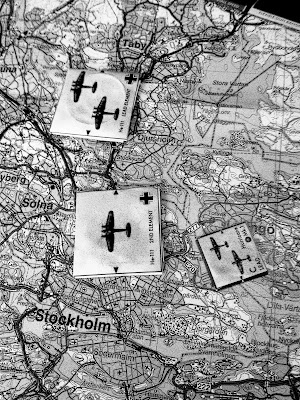 So here is the same bombing run as before but this time I added two flights of British Hurricanes to defend the industrial complex. Last time it was just the flak that defended the target now it is the fighter planes that will try to stop the attacking Germans. Lets see how they do.


Well this definitely turned out differently than last time. Two German He-111's were shot down but all four Hurricanes were taken out.  The rear guns of the He-111's are stronger than any other arc of attack. The British should avoid the six o'clock position on the bombers. Also the bombing mission scored a lot less due to the lose of two of the He-111's.

Overall I think this is an OK turn out. The British should try to attack from other arcs to the bombers next time.

The game moved fast, except for all the pictures I was taking....

Well have a good week!


Posted by Rattlesnake at 10:13 AM No comments:

Yesterday I played two scenarios with T.A.C. both are the same mission but with one difference. The first mission had Flak to defend the factory complex from the attacking HE-111 bombers and the second mission had two flights of four Hurricanes to defend the bomber target.

I took a bunch of pictures for you to look at.  Instead of letting you see the wonderful table cloth on our kitchen table I decided to grab one of the maps I have at the house and I used that for a background for the mission.  I will describe what is going on in each of the images.

Now I just want to make a note here. Sweden was not attacked by the Germans, but the Russians did accidentally dropped bombs on a play house in Stockholm during World War II.  The Russians said that they made a mistake and though they were bombing Germany....

Over all the game moves quick and the rules play well. I will have to put on a game at the club to see what some of the members think of it so I can see if it will be worth the time and effort to build a large bombing force. So far the rules have been good and all has played out well.

Thanks for checking out this AAR. I will have the next one up soon!

Posted by Rattlesnake at 3:59 PM 2 comments: