Hi everyone!
I got in two games this weekend the first is a solo game of "Wars of Insurgency" a little action in Syria.

The day was getting late and the squad of Russian infantry were late for their convoy movement back to the base camp because of some type of mechanical difficulties with the BTR-80, something about a lack of brake fluid.  The squad comprised of 7 troops, including the squad leader and the troops. In total they had 5 troops armed with AK-74 rifles and one troop with a LMG and one troop armed with a RPG weapon. 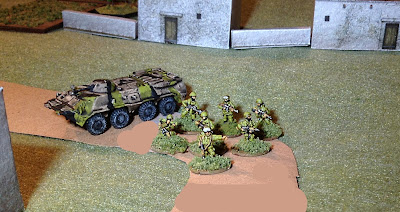 The troops were to travel back to base camp alone along the normal route that they normally travelled and to do it fast without delay.  Normal procedure was to travel in a minimum of Platoon convoy of 3 BTR-80’s with crews and troops. Each BTR-80 has a crew of 3 troops to drive and operate the gun systems in the APC. 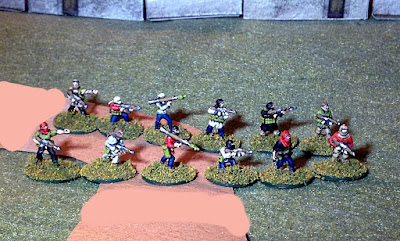 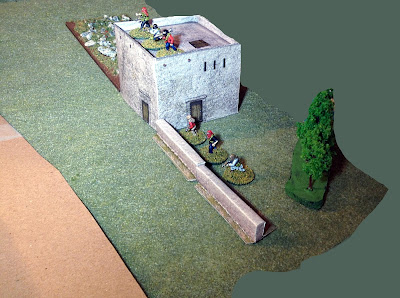 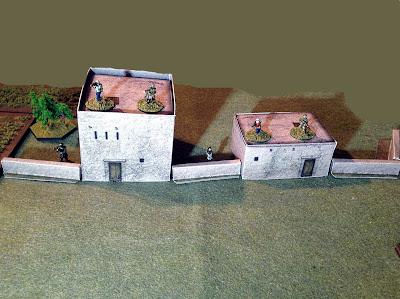 So, The BTR-80 and the 7-man Russian squad headed down the road to “the Ville” the village with no name that is just a dot on the local maps. The Ville has been friendly and peaceful and there have never been any issues with locals of the town. So, the crew was not concerned with any type of attacks. 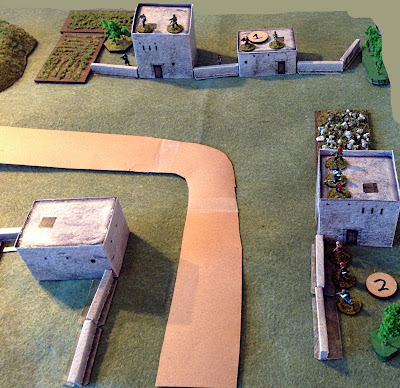 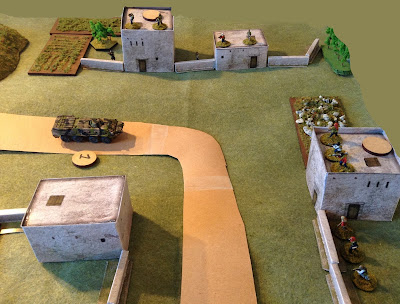 Well today was going to be different. Waiting for the BTR-80 was two squads of local Syrian Rebels who were waiting for just such a situation to attack and to strike a blow to the “foreign invaders”. The two squads are made up of militia type soldiers with no uniforms and armed with AK-47’s and each squad had an old RPG-7. The Gunners of the RPG-7’s have had the most practice with their weapons.
The BTR-80 gets to the heart of the Ville when an RPG-7 slams into the left side of the BTR-80 and causes the crew to be shocked and they were starting to stop to allow the troops to get out and fight. They had been Ambushed. Unfortunately, they were not able to stop before the second RPG-7 fired on the BTR-80 from the front and that RPG killed the BTR-80 Crew and started a fire in the ammunition compartment of the BTR-80. The Squad of soldiers went into auto mode and everyone tried to escape the now burning vehicle. 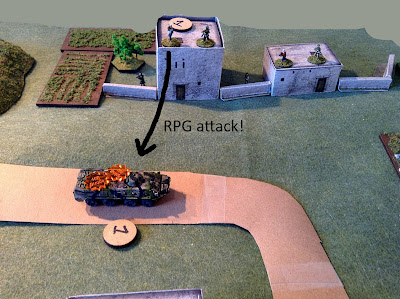 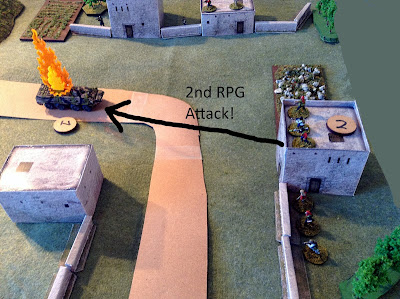 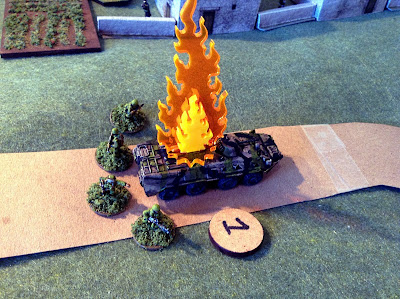 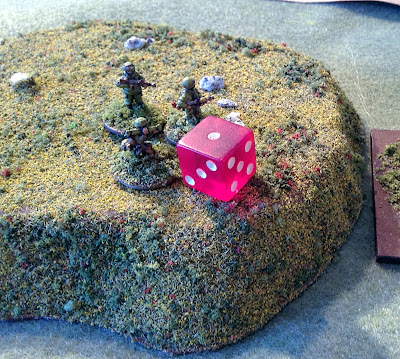 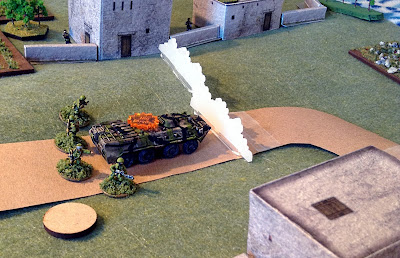 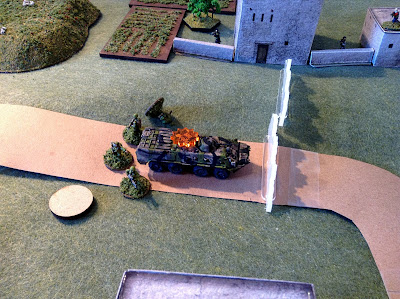 Three of the seven squad members were not able to escape the destroyed BTR-80 and died in the fire. The dead included the RPG troop and two other soldiers armed with AK-74’s. The remaining four troops get out of the vehicle and go prone to get an idea of what is going on and where they could set up a defense position. 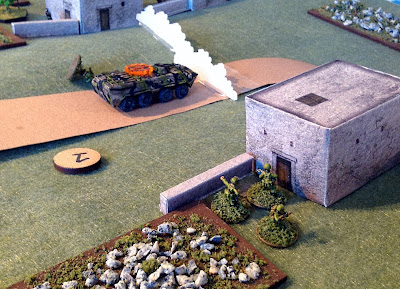 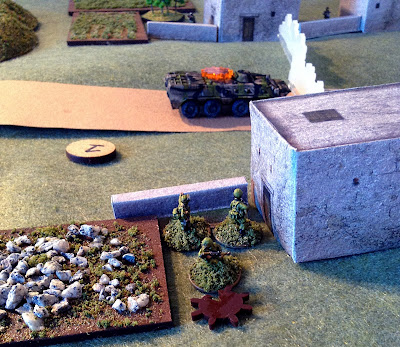 The Rebels start to open fire on the escaped Russian troops with their small arms and they are able to kill one more of the Russians. Luckily the BTR-80’s smoke mortars fired off and provided a smoke screen to the far end of the village.  The remaining three Russian soldiers move to and over a stone wall next to a small building and took cover. One of the troops was freaking out and the Squad leader had to shake him out of his state of fear.  The three Russians made it into the small stone house and they started to return fire. The LMG started to score hits on the Rebels but the stone wall and stone homes were providing great protective cover for the Rebels. 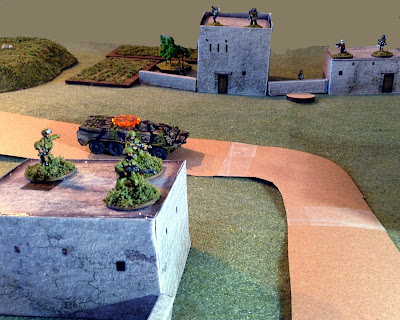 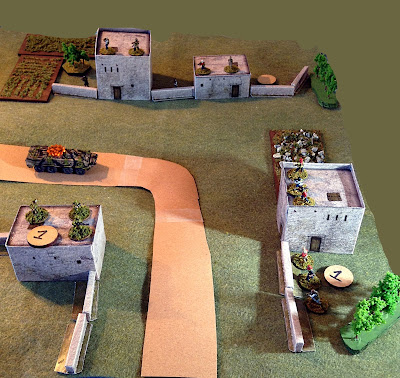 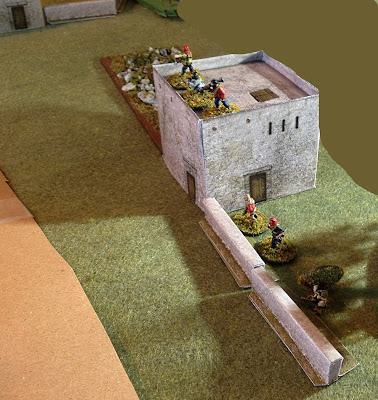 The Squad leader grabbed his radio and called for immediate support and was told that there was a Mi-24 Hind in the area and it would be there soon. The radio operator told the squad leader to mark the target area with red smoke. After a few minutes the LMG gunner lost his nerve and stopped firing. The squad leader tried to get the big Russian back into action, but he failed, and the big Russian dropped his weapon and ran out the door into the rocky ground behind the little house.
The last two Russians kept up the rate of fire, but the Rebels were pouring in the small arms fire from two sides of the little house. Things were getting bad for the Russians. Then the sound of the Mi-24’s blades cutting through the air and then the sound of the explosion of the rockets that the Hind had fired at the building and the area around the red smoke marker. This heavy bombardment from the Hind help to kill a large part of the Rebel squad around this building. 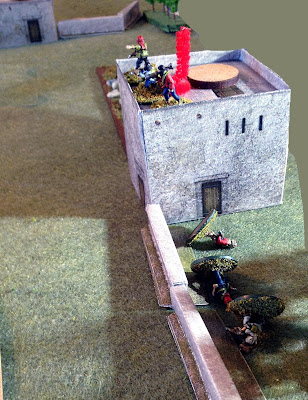 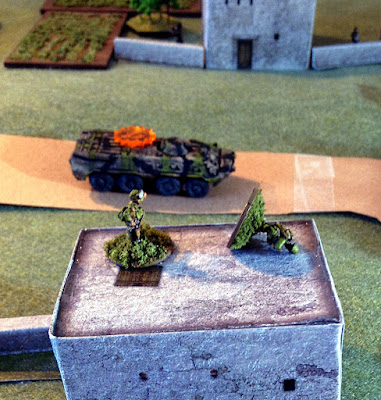 At the same time the last trooper of the Russian Squad was shot, and the only person left was the squad leader. He knew he would be captured and requested that the Hind fire on his position. The Hind never got the request and the Russian squad leader was captured by the Syrian Rebels.
This ended the ambush. 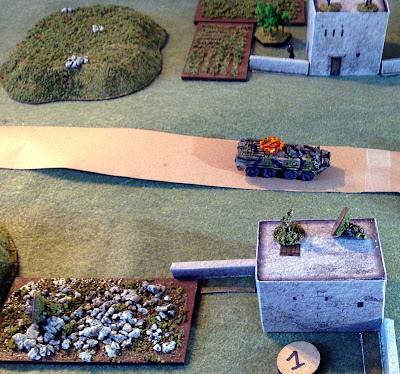 The game was very enjoyable, and I liked how it flowed and how easy it was to learn. I will continue to build more BTR-80’s and paint up more Russians and Rebels.  This can be a fun club game.

Thanks for reading my AAR!
Posted by Rattlesnake at 5:36 PM 8 comments: